North American indices advanced to record highs in the fourth quarter, a period that traditionally generates the best equity returns of the year. The final quarter of 2017 saw the S&P 500 Index jump 7.3% ($ CAD total return), while the Dow Jones Industrial Average gained 11.0% $ CAD. A sharp sell-off entering December of the large technology and internet names that led the markets higher throughout the year failed to halt the U.S. benchmarks’ relentless climb to fresh highs. Instead, the market saw a dramatic rotation to other sectors, banks in particular. The strength in U.S. equities was broad and was especially strong in the consumer discretionary, financials, and technology sectors (even after the big sell-off in mega-cap names). Much of the year-end momentum was attributed to progress on tax reform efforts in Congress. The interest rate sensitive utilities sector was the only group to lose ground in the quarter.

As oil prices surged in the final week of the year, the S&P/TSX Composite Index finished strong.

The S&P/TSX Composite Index struggled mid-quarter as Canada’s amazing first-half 2017 run of economic data came to a sudden halt, and concerns grew that NAFTA renegotiations were breaking down. But, as oil prices surged in the final week of the year, the index finished strong to end the quarter up 4.5%. The Bank of Canada acknowledged the softer economy with cautious comments when it left rates unchanged at its meetings in October and December. Meanwhile, U.S. GDP, which started the quarter at a solid pace despite the effect of hurricanes, reportedly strengthened toward year-end, allowing the U.S. Federal Reserve to deliver a rate hike at its December meeting. The widened U.S.-Canada interest rate differential weighed on the Canadian dollar, which despite the late December rally, finished the quarter down almost 4% from its September peak.

Crude oil prices saw a solid gain. Growing tensions between Saudi Arabia and Iran, a Saudi crackdown on corruption, and an extension of OPEC production cuts until the end of 2018, all helped lift West Texas Intermediate crude oil (WTI) to a two-year high. Nonetheless, energy stocks posted the worst sector performance within the S&P/TSX. The energy sector is the only sector to close the year in the red. The highly volatile health care sector, although not a very significant weight in the index, had the best quarterly performance by far, driven by developments at Valeant Pharmaceuticals International Inc., and at Canopy Growth Corp., which together comprise over 60% of the sector’s index weight. 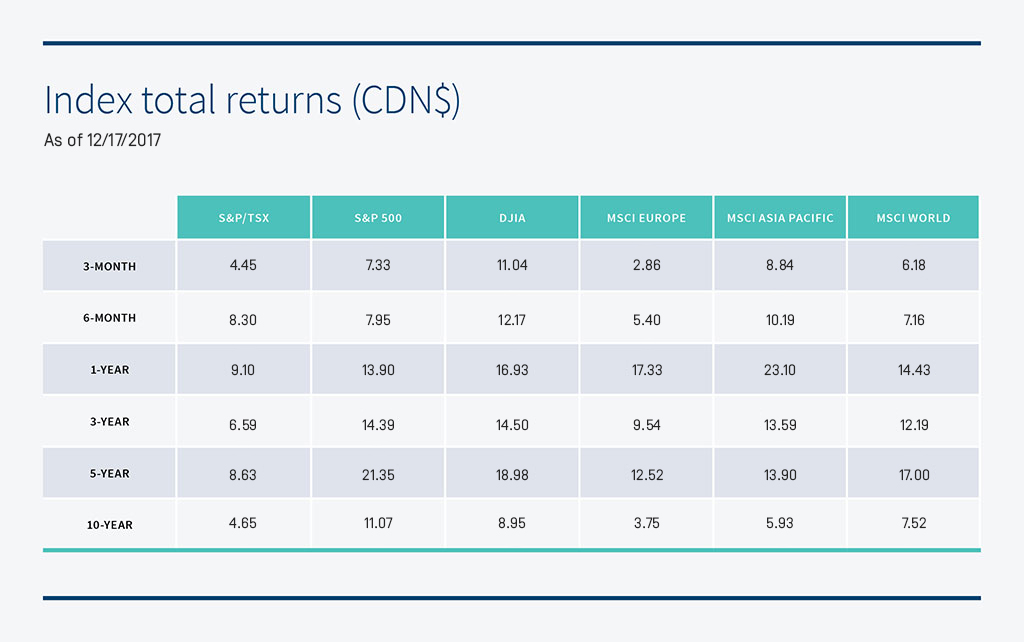 This commentary is published by Investors Group. It is provided as a general source of information. It is not intended to provide investment advice or as an endorsement of any investment. Some of the securities mentioned may be owned by Investors Group or its mutual funds, or by portfolios managed by our external advisors. Every effort has been made to ensure that the material contained in the commentary is accurate at the time of publication; however, Investors Group cannot guarantee the accuracy or the completeness of such material and accepts no responsibility for any loss arising from any use of or reliance on the information contained herein. Investment products and services are offered through Investors Group Financial Services Inc. (in Québec, a Financial Services firm) and Investors Group Securities Inc. (in Québec, a firm in Financial Planning). Investors Group Securities Inc. is a member of the Canadian Investor Protection Fund.

Why You Shouldn’t “Sell in May and...
END_OF_DOCUMENT_TOKEN_TO_BE_REPLACED