U.S. equities began the quarter with a strong start driven by tax reform and accelerating corporate earnings growth, while Canadian stocks lagged mostly due to trade uncertainties. The U.S. Federal Reserve (the Fed) and the Bank of Canada (BoC) each raised their benchmark interest rates in the quarter for the third time since the summer of 2017. But while economic growth appeared to be accelerating in the U.S., slowing growth in Canada caused the BoC to take a cautious tone with respect to further moves. The shift in relative growth and rate hike expectations put further pressure on Canadian equities as well as on the Canadian dollar, whose value declined by two U.S. cents, or 2.5%.

Fear of inflation and a more aggressively hawkish Fed triggered a return of volatility and a global stock correction in early February.

Fear of inflation and a more aggressively hawkish Fed triggered a return of volatility and a global stock correction in early February. Both Canadian and U.S. markets saw double digit declines from their peaks for the first time in over two years. The pain appeared to be short-lived as a market rebound recovered much of the loss only five weeks later. But then a series of protectionist trade announcements from Washington – tariffs on steel and aluminum, and a variety of tariffs more specifically targeted at China – ignited fears of a global trade war that pushed equities into another down leg around the world. Canada’s S&P/TSX Composite Index finished the quarter firmly in the red, dropping 4.5%. The fall in U.S. indices was more moderate, and thanks to currency effects, still delivered gains to Canadian investors. The S&P 500 Composite Index was up 1.8% ($CAD total return), while the Dow Jones Industrial Average was flat.

Despite strength in crude prices, energy was the worst performing of the major sectors in Canada, while the lesser-weighed health care sector, driven by the highly volatile cannabis stocks, registered the greatest absolute decline. In the U.S. some of the so-called “bond-proxies” (telecom, staples), which tend to underperform as interest rates rise, lost the most ground, along with the energy sector. In both markets the technology sector, especially its mega-cap names, was the clear leader for the period, despite its coming under significant pressure in the market downturn.

Almost all major global markets reported better economic data and corporate earnings growth, but saw their equity indices plunge into the red on rising global trade tensions. Japan and Europe, which have both been experiencing their best economic performance in years, also had stock gains restrained by stronger currencies. However, the weaker Loonie rescued Canadian investors. The MSCI World Index advanced 1.3% $CAD, led by relative strength in the MSCI Asia Pacific Index, which climbed +2.5% $CAD. The MSCI Europe Index lagged, with a slight rise of 0.5% $CAD. 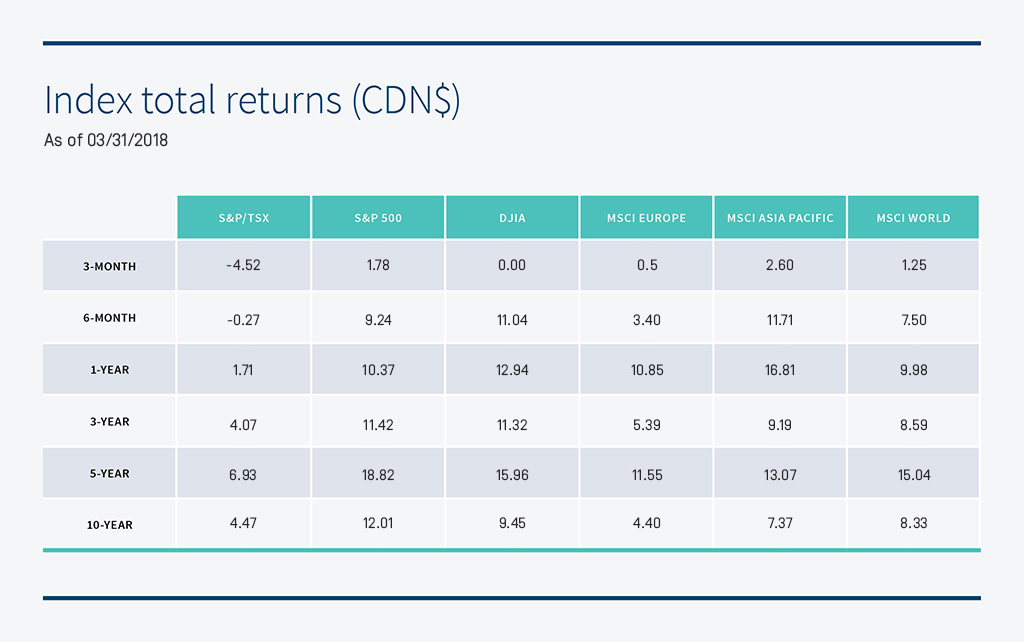 Clinton, Trump and Your Investments
END_OF_DOCUMENT_TOKEN_TO_BE_REPLACED