Over 5.3 million refugees have fled Ukraine to neighbouring Poland, with an additional one million fleeing to the U.K. and other parts of Europe. When the conflict started, the world watched and waited to see how this would affect the global supply of food and energy exports from across eastern Europe. Russia is a major oil producer, exporting 85% of its production to Europe and China at the time of the invasion.

Global benchmark crude prices surged following the invasion, causing oil to trade above US$100 per barrel, and swung wildly in the weeks to follow. This brought major supply and inventory shortages, which led many to believe that commodity prices would continue to push inflation to elevated levels.

When we look back at the data from January 2021 to the present, the idea that commodities were a catalyst of higher inflation and that they would create havoc in the financial markets seems to have been overplayed. In fact, over the past seven months, the level of commodity prices has decreased from pre-war levels. Also, food and energy price appreciation was already very strong, following the rebound in economic activity from the increase in global money supply and the rapid reopening in 2021.

Yes, it’s reasonable to expect some short-term disruption within commodity prices when there is conflict between high-exporting economies. The economic and political sanctions against Russia did not help energy prices either. Oil-producing nations increased their production to maximum output levels, and in March, U.S. President Joe Biden began releasing one million barrels of crude oil per day over six months, from his country’s Strategic Petroleum Reserve (SPR). The historic release of SPR crude provided the U.S. economy with a record amount of crude oil supply, which will continue until the end of October 2022.

Meanwhile, European economies are adjusting to the changing energy markets, and consumers there, as well as in North America, have been hit with higher fuel and food prices all summer. However, since August, we have seen prices of major commodities (wheat, soybeans, crude oil, corn and potash) fall to pre-war levels.

The chart below shows the spike in several commodity values up to July, along with their significant decreases in August. 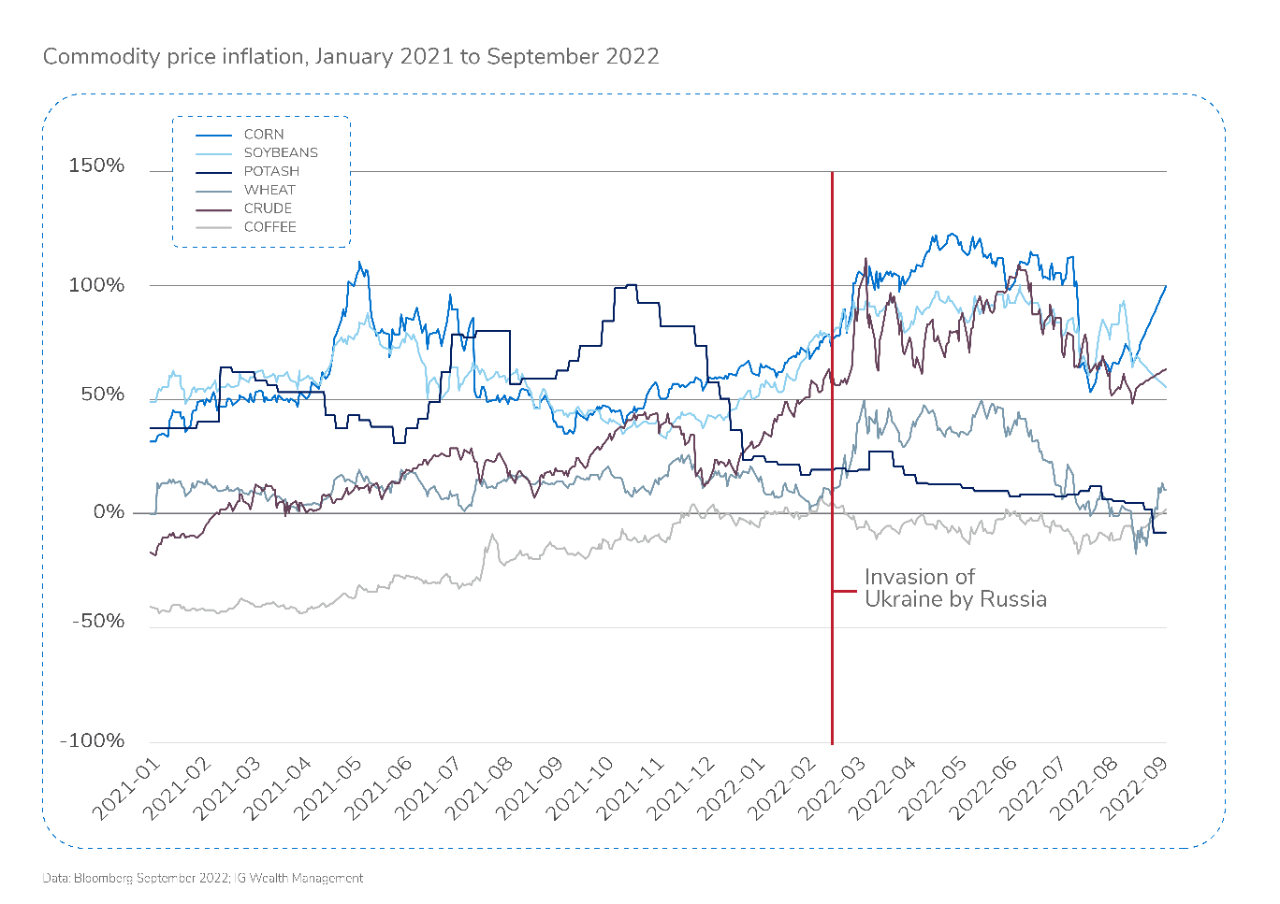 Around the world, “crisis inflation” made headlines, as some analysts believed there would be massive food and fuel shortages. These fear-based headlines created panic among investors and allowed speculators to drive the futures market into a frenzy, buying up commodity contracts and elevating prices. In reality, their fears were overblown; the inventory levels smoothed out, as they usually do, creating less volatility in the underlying commodities by the end of summer.

As of September, global food prices fell for a fifth consecutive month, following weakened demand for some products and a seasonal uptick in supplies. Wheat harvests in the northern hemisphere helped ease supply constraints, and more grain trickled out of ports in Ukraine. This may offer some relief to consumers as they grapple with a higher cost of living. Still, these declines have not translated to lower consumer prices, which remain more expensive than a year ago. In our previous notes on August 12, we mentioned “price stickiness,” which has caused goods and services to remain at higher than normal levels, due to corporations’ reluctance to lower prices, even when there have been price reductions in the underlying raw materials.

So, what does this all mean?

During any global crisis, across different periods of time, investors and speculators get excited about geopolitical events. However, Russia’s invasion of Ukraine may not have a meaningful or lasting impact on financial markets, outside of normal volatility.

Indices, such as the S&P 500, S&P/TSX Composite and MSCI World Index, had been experiencing volatility since late January, some time before the start of the war, which resulted in a low on June 16. From a market perspective, the war has had less of an impact than investors may have initially believed (such as causing a food crisis), and we are seeing signs that inflation is starting to come down.

It is impossible to predict the actions of billions of people and hundreds of governments, and this uncertainty contributed to short-term volatility. Over time, the markets will find a new trendline and investors should see asset classes return to positive growth.

Consistent with our long-term view, geopolitical risks rarely have long-term impacts on the markets. Meanwhile, we look forward to the end of this conflict, so the people of Ukraine can return home and begin the process of healing and rebuilding.